Tips on Sharing the Road: From Big Rigs to Bikes

I have to admit, when I was younger and really up until about 10-12 years ago, I would get super frustrated when I was on the interstate behind a semi truck. I never understood why “they wouldn’t just speed up” or why their trailer was all over the road. But I also never understood why people will cut right in front of a big rig getting over into a lane without thought of how that 70,000 pound vehicle might not be able to stop, or why people would just drive in a lane next to a semi in their blind spot.

As some of you may know, my husband is a truck driver and I’ve road with him a few times. I’ve learned a lot about how it is for them on the road, and how we as drivers need to be more respectful of truckers on the road – for more than one reason. 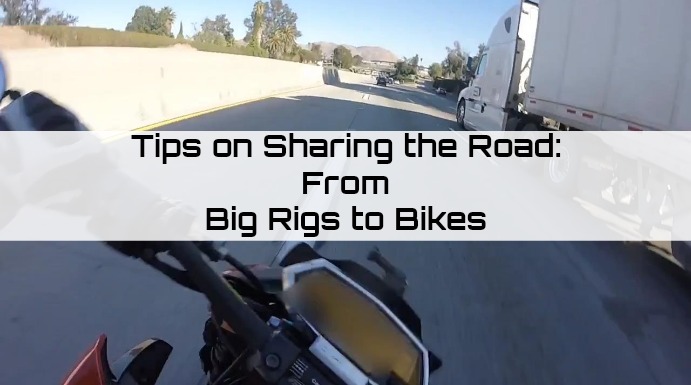 Trucks Can’t Stop on a Dime. There’s that old saying , and it rings true. If you cut in front of a semi truck in traffic or just going down the road and you are frustrated with them for going slow – just don’t! Trucks have a lot of weight behind them and they don’t stop as quickly as a car does. Being a few minutes early (if even that) isn’t worth your life – or theirs.

Stopping Riding Their Butts. Did you know most semi trucks are speed regulated? Literally they cannot go past a particular speed. So if they are going up a hill, or dealing with trying to pass another slow truck, give them space. Most will get right over once they pass, or get up the hill. But stay off their butts  – if they do have to stop and you aren’t paying attention, things could get ugly fast.

Speaking of Distractions. Overall a rule for the road needs to be to stay focused on the road – stay off you cell phone, don’t be putting on make-up, or reading something, or worse going down the road. (And YES, I’ve about seen it all!) If you run into the tail end of a semi truck, odds are you won’t make it out alive. It is not a trucks fault if you are not paying attention, but it could be a deadly mistake for you as a driver.

Watch Wide Turns. When a truck needs to turn, they need a lot of space. You should pay attention to their turn signals to see where they are planning on turning and stay out of their way! As a rule don’t pass any truck as its turning in any direction. Being 14 feet high and weighing over 40 tons, trucks can easily topple over and roll right on top of a smaller vehicle. Keep this in mind too, when trucks are coming towards you at an intersection. Be sure to stop behind the lines, because if you are beyond it your vehicle could be in the way and you could get hit.

Move on By. Don’t stay directly behind, in front of , or next to a semi. (unless you can’t help it at all, like in a traffic jam). Most likely if you are in any of these spots the trucker cannot see you!

They are Just Trying to Do Their Jobs. Most truck drivers aren’t like the truckers you see on T.V. or in the movies. They are on the road to provide the best life for their family, often staying out weeks and months at a time. They have a lot riding on them – not only taking care of their families, but getting to their destination with their trailers full of products safely. They just want to get home like you do – give them some respect.

Yes we have one of these too – and I am shocked at how many people ride the butts of people on bikes. Or who turn out in front of them! So many people have generally no regard for motorcyclist and though your life might not be as in much danger – their lives are.

Give them Space. If you get behind a bike on the road, give them a lot more space than you would another vehicle. Though it may be a minor fender bender if you would hit another car, you could cost someone their life by bumping a motorcycle when you are going 25-35 mph. They also may need to stop in a hurry because of vehicles in front of them, so giving yourself extra room to stop to avoid an accident is a great way to give them space.

Stay off Your Phones! Same way with the semi’s, but with a bit more danger. I cannot tell you the amount of times a car has passed us, and went into our lane that have been on their phones! Being on the back of a bike I CAN SEE IT! We have to be on high alert, and we know when you are distracted. Whatever is going on on your smartphone is not worth anybody’s life!

Give Them Time to Turn. Turning off on a road or exit is a bit more of a challenge on two wheels than on four. Bikes will turn corners at a lot slower of a speed than a car, so make sure that you are giving them time (and space) to make the corner safely.  Debris on the road such as gravel, or grass can also be extremely dangerous for a biker and you need to give them time and space to cross it safely.

Listen and Watch. Driving down the road and switching lanes is probably like second nature to most drivers – but sometimes you are so comfortable with the process that you aren’t cautious. Bikes can be in blind spots just like you can be in a blind spot for a big rig, and you need to do a double take when switching lanes, or turning.