The Unknown Dangers of the Web: Keep Your Kids Safe

We all remember the struggles and hardships of growing up. That weird time between being a ‘kid’ and being an adult. Life seemed soo hard. We worried about things like trying to fit in with the ‘cool’ kids, making the basketball team, or if we were going roller skating or to the movies on Saturday night. We’d sneak a late night call to our boyfriends to talk about our plans for the weekend, giggle (or smiled like an idiot)  when they held our hands, and blushed when they kissed us on the cheeks.
I thought growing up was hard – but the more news articles, or Facebook post I read, the more scared I am for my children. Not only do we have men abducting and raping our girls (and some even holding them captive as their sex slaves for years), date rape drugs, sex slavery going on right in our own backyards , abortions as easy to get as aspirin, but we have sexual predators in our own homes.
Yes – I said our own homes, the internet.
The internet can be a wonderful thing: You can buy, and sell, contact lost friends or loved ones, pay bills, watch movies, play games and have access to a plethora of information that our high-school selves only could of wished for . But deep into the world wide web there is evil learking. Young kids without inhibitions, chatting and sharing with strangers like they are  best of friends. Uploading videos of themselves, Skyping with a stranger from across the oceans. Doing things we as parents, have no clue about. 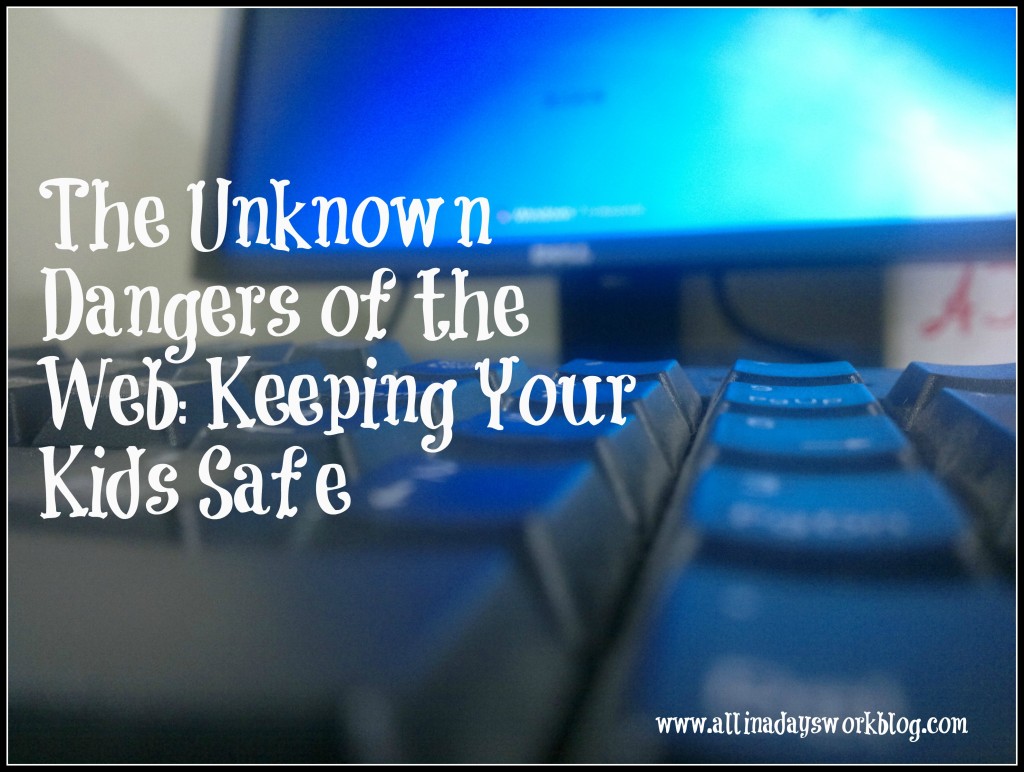 Now before you tell me, “Hey, I have this under control. This isn’t a problem in our home. My kid is a good kid/supervised/we don’t have the internet, yada,yada” ,let hear me out. ‘Where there is a will, there is a way’. .this is coming from a girl with experience in pulling the wool over her parents eyes. Growing up in the 90’s it was not nearly as easy to sneak around but I managed. Imagine what kids are able to do today? Keep an eye out for these clues, and TALK with your children. Make sure that they know you are there for them, and there to talk about anything that might have happened over the web.

Before I start on how I found the things I’m about to share , let me tell you why I did some research: My oldest daughter is a techaholic. She always wants to be on her computer, or her iPod touch, or my iPad, she feels she constantly needs to be ‘online’. She does have social media – which I monitor – her email, Facebook & Twitter. I have her login, password, and actually all copies of her emails (coming and going) come directly to my inbox for every.single.message (check out zoobuh.com if you have younger kids or pre-teens that have been begging you for an email address), anyway, I felt like I was doing everything to protect my daughter from the nut jobs out there. After all I am the daughter of the Dad who ‘always found out’, so I felt pretty confident.

Now I don’t have a big dramatic story about my daughter sharing things she shouldn’t (which we will talk about below), but I did find some crazy apps where kids shared their ‘stories’ and some were, um, not suitable for minors. I started to figure out why she would freak out if I went to take her iPod from her, or wanted to look at her internet history. I know that eventually these things would of been brought to her attention, and that she does need to learn these aren’t things a young lady should be reading, but overall this wasn’t detrimental  to her well being. But being the type of person I am  I decided to seek out what I needed to watch for – and it opened up a world I wish didn’t exist.
To be honest I feel I could probably wait a few weeks and put together a more structured and  organized list of the things I’ve found – but I feel this is an important message and needs to get out there. I will add as I find things, so please excuse me if I seem discombobulated at any point.

Below are a list of things I feel parents should keep an eye on. As a disclaimer I am not saying to stalk your child, nor am I saying to check up on your grown child ( who is still living at home), but be aware that not everything is as it seems:

Another thing I want to mention is a world of pedophile, blackmailing scum that prey on young kids who ‘make a mistake’. They call themselves Cappers. They stalk chat rooms, hack private Skype conversations, and wait for a girl to lift her shirt, or a boy to make a similar mistake. Then they blackmail the kids to get them to do what they want. They threaten posting the screenshot online tagging their name so anytime someone ‘googled’ them that picture would pop up, they threaten to hack their Facebook, or send the pictures to their friends and family. They scare the kids to showing or doing more- and then continue blackmailing them until the kid feels there is no way out.
This kinda of stuff –  the “sextortion”  as they call it, is happening everywhere. We, as parents, must do everything we can to protect our children! Most young girls have no idea that the “13 yr old boy” they are chatting with is really a 45 year old man!

We’ve talked about the hidden sexual dangers – but what about drugs? Theft? Did you know there are ‘hidden’ sites out there? Silk Road and “Hidden Wiki” ?? Both offer the opportunity for to buy illegal drugs, a sex slave, or even a hit man!