The Shocking Truth About the Germiest Places in Your Home

Let’s play a game of “Who, What, When, Where, Why?” Who? You. What? Germs. When? All the time. Where? On pretty much every single surface in your home. Why? Because they can.

I’ll admit, that wasn’t a very fun game. Even though we all know that germs are everywhere, it’s easier not to think about it too much. A few germs never hurt anyone, right? Wrong. While there’s no need to buy your local grocery store’s entire supply of cleaning products, consumer healthcare website Treato wants you to know the shocking truth about the germiest places in your home​. A few of these might surprise you. 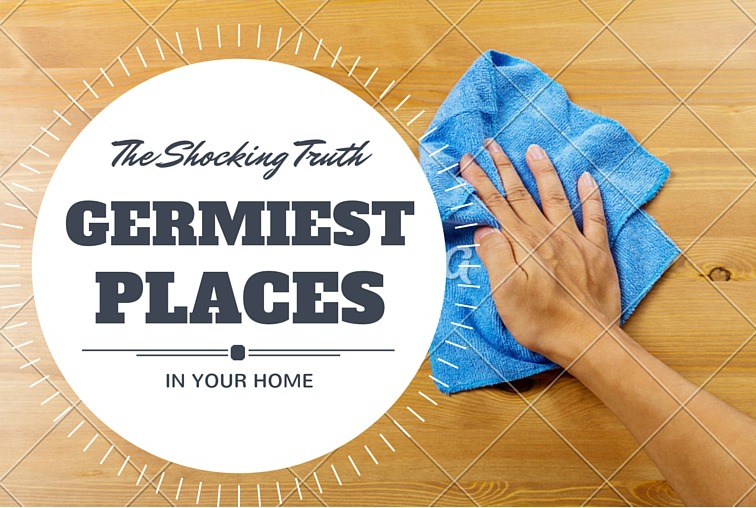 Walls around the toilet.

Most people think the bathroom is the dirtiest place in the home. However, when NSF International performed an analysis of 30 common household items in 22 different homes, they found more coliform bacteria—a type of bacteria that includes Salmonella and E. coli—in kitchens than in bathrooms. That said, bathrooms are still pretty germy, and people often overlook the walls surrounding the toilet when they’re cleaning their bathroom.

You might not touch the knobs on your stove as much as you touch the handles on the kitchen faucet, but they still get a lot of action. Sometimes, when you’re juggling different tasks while preparing a meal, you might forget to wash your hands before adjusting the stove knobs. Make sure to disinfect the knobs as often as you wipe down your kitchen counter.

Speaking of kitchen counters, they get more traffic than Times Square on New Year’s Eve. Just think of all the things you might place on your kitchen counter: groceries, dirty dishes, unwashed produce, keys, your hands after a sneeze (better protect yourself from spreading this year’s cold and flu), your purse—even a baby! Since the kitchen countertop is where most of the food prep happens, clean it once or twice a day with hot, soapy water.

If aliens used the Internet—and only the Internet—to study human behavior, they would probably come to the conclusion that we revere cats and dogs over all other creatures, including ourselves. But no matter how cute your puppy or kitty is, pet toys are often covered in coliform, mold, yeast and even Staph. Always wash your hands after playing with Rover. Every week or two you should wash rubber or plastic pet toys with hot water and dish soap and throw the fabric ones in the wash.

Why is it that, even though you rinse off your toothbrush each time you use it, your toothbrush holder always ends up getting sticky and covered with grime? One solution to this problem is to use a cup for your toothbrush instead of a holder. You’ll still have to clean the cup, but that’s as easy as putting it in the dishwasher. If you choose to using a toothbrush holder, just be sure to wipe it down once a week with a disinfecting wipe.

Like your kitchen counter, your cutting boards do a lot of hard work but don’t get much love and affection in return. Just think of all that chopping and dicing and all the different meats, fish and produce that a cutting board endures in a given week. And to top it all off, all those food particles love to hide in a cutting board’s tiny cracks, a process which allows dangerous bacteria like E. coli and Salmonella to linger and spread.

We saved the germiest for last. These two go together because you can’t really have one without the other. Your sink is your kitchen’s equivalent of the River Styx—the last place food goes (besides your mouth) before it disappears down the drain or garbage disposal. On top of all the raw and unwashed foodstuffs that go in and around the kitchen sink, we often wash our hands in the sink after performing yucky tasks like picking gum off the bottom of a shoe or replacing a bicycle chain. You should clean your kitchen sink at least once a week with a disinfectant like white vinegar.

I have a confession to make. As a kid I thought sponges were clean because you constantly put soap in them. Eventually I learned the truth: your kitchen sponge is arguably the single germiest item in your home. In the NSF International study mentioned above, 75% of the sponges (and kitchen rags) analyzed were found to contain coliform bacteria. Considering sponges are used for spills on both the kitchen counter and the floor and often aren’t cleaned regularly, that shouldn’t come as a surprise. The trick to keeping your sponges (relatively) bacteria­free is to sanitize them daily. You can put them in the microwave (two minutes on high), or pop them in dishwasher. Alternatively, you could invest in some microfiber cloths, which are similarly effective for cleaning and can be thrown in the washing machine and dryer.