Pirates of the Caribbean: Dead Men Tell No Tales – GO SEE IT!

If you love the Pirates of the Caribbean adventures as much as I do you can NOT miss this movie. Disney knows how to bring the pirate life alive! I’ve been waiting for this movie for years. Whatever happened to Will Turner and the Flying Dutchman? What about the last time we saw Elizabeth Swann with their son what’s happened to them? I guess you will have to watch and see 🙂 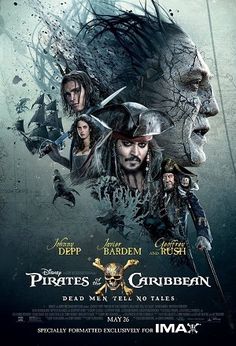 Captain Jack Sparrow never ceases to amaze me. He always finds his way into some type of rum induced trouble. Always taking you on an amazing pirate adventure with plenty of laughs along the way.

This time he finds himself being chased by his old archenemy the ghostly Captain Salazar and his crew of ghostly sailors that have escaped from the Devil’s Triangle. Captain Salazar has a strong hatred towards our beloved Jack Sparrow and wishes to seek revenge for himself and his whole crew. In order to survive this tragic situation he must find the Trident of Poseidon, that has been said to not exist. To do this Jack Sparrow must make some rattled alliances, a beautiful and smart astronomer and a strong willed young man from the British Navy.  We also get to see some old friends in this film including the ferocious Captain Hector Barbossa and the ever loyal Joshamee Gibbs.

The real-life action can be a little scary if you have tiny ones but I think this is still a great family film. Join Captain Jack Sparrow on this ghostly pirate adventure this weekend. Pirates of the Caribbean: Dead Men Tell No Tales opens in Theaters this Friday May 26th. Make sure you stay after the credits 😉