Weight stigma, also known as weightism, weight bias, and weight-based discrimination, is discrimination or stereotyping based on one’s weight, especially very large or thin people. The term is a misnomer as the stigma arises from the condition of being obese, or schadenfreude arising from the suffering from the disease, and not the body mass of the individual stigmatized in this manner.[citation needed] Weight stigma reflects internalized attitudes towards the obese that affects how those who are the targets of bias are treated.

A person who is stigmatized possesses a weight that leads to a devalued social identity, and is often ascribed stereotypes or other labels denoting a perceived deviance which can lead to prejudice and discrimination. Common, “weight-based”, stereotypes are that obese persons are lazy, lack self-discipline, and have poor willpower, but also possess defects of intelligence and character. Common weight-based stereotypes of non-obese persons are that non-obese persons are unattractive, anorexic, unhealthy, diet and/or exercise excessively. Pervasive social portrayals of obesity create and reinforce biased attitudes. from Wikipedia

I never really considered myself ‘obese’. I knew I was big – ‘big boned’ as I’ve always like to refer to myself – but never just plain fat. At a size 16/18 with my bone structure I have always felt that I carry my weight pretty well, though I do know I need to lose weight to get healthy and be a better me. I’ve never really liked to be in a bathing suit in public, or even eat in public. I have always been aware of my surroundings, able to discreetly blend in, and try not to stand out so that anyone had an opportunity to really notice my size. Even before I had kids and was at a healthy size 10/12 I still always felt big and was always aware that judgement could be around any corner.

After I got married and had 3 children, I started to feel a bit more comfortable. I’m not sure if it has to do with my age or the fact that I just don’t care as much anymore -and even though I still try to blend in, I haven’t felt obese or discriminated against – that is until yesterday.

My family took a trip to King’s Island amusement park in Mason, Ohio yesterday afternoon. Thanks to my sweepstaking skills we won a total of 8 tickets so that my sister, my parents, my nephew and my kids could all go enjoy a day at the park together. Now I can tell you that though I’ve never had extra room in those small roller coaster seats, I’ve never had a problem buckling my belt, or pulling the safety harness over my body. As my entire family stood in line for the Diamondback , (one of the newer roller coasters I had yet to ride in the park) I had no concern that I would fit. 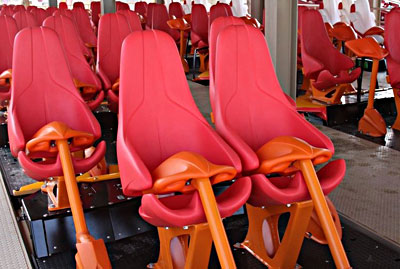 Above are the seats I’m talking about. Unlike any traditional roller coaster, the Diamondback does not have a pull over the head harness, but a leg/waist harness. As I sat down in the seat I realized that it was quite a tight fit – just as it was for my sister sitting next to me. I pulled the harness up to my stomach and though it wasn’t the most comfortable I felt secure.I didn’t think anything of it until the ride ‘worker’ decided that it wasn’t ‘tight’ enough and in front of my entire family, as well as the crowd waiting in line he held his hand up to let the entire universe (well, if felt like it) that he needed to help me make it ‘tighter’.

He put both hands on the orange harness and said O.K. on the count of 3, and yelled “1,2,3!” and shoved the harness into my stomach/legs. He said, “OK we need to do it again – and proceeded to yell, “1, 2, 3!” and then tell me I need to ‘push my butt’ back into the seat farther. My face was red, and I looked up to see the entire line waiting to ride staring at me. My sister next to me leaned over and whispering “the lady who checked my seat left it loose – (which my sister & I are similar in size), and as she said that he proceeded to SHOVE the harness into my gut again.

Never in my life have I felt so embarrassed. It was hard to enjoy the ride, or the rest of the day in fact, because I couldn’t quite get over it. In fact, I only rode 1 ride the rest of the day (and that was our first ride), because I was afraid maybe I was bigger then I was last time I was there. I couldn’t ride with my kid’s because I was afraid of how I would be treated, ashamed of being me – even more then in the past. Is it O.K. for someone to judge or act that way because I’m not a size 6?

My story isn’t much different then the hundreds of others that I found in my research online. I knew there was discrimination for body types – but I never realized that they had a word for it. Not to mention studies on it. Lots and lots of studies. Did I also mention they have 10 Things I Hate about Fat People  , You’re Fat Because You’re Stupid  and even an article on  I Hate Fat People in Men’s magazines (thanks guys, like relationships aren’t hard enough). There are Facebook pages & groups, horrible pictures on Tumblr and Pinterest and every other social media mocking ‘fat’ people.

Have you ever been affected by ‘weightism’?

This entry was posted in Fitness/Health, Motivational Monday. Bookmark the permalink.