Most of us have a general idea of the name of parts that keep our vehicle running; and some of the most common ones that need replaced or repaired; but do you know what those specific parts actual do, and how they function? We are going to do a mechanics 101 series that gives you a break down of car part basics – starting with the alternator.

So you know that your car’s alternator is an important part of the mechanical function – but do you know exactly what it does and how it could fail? 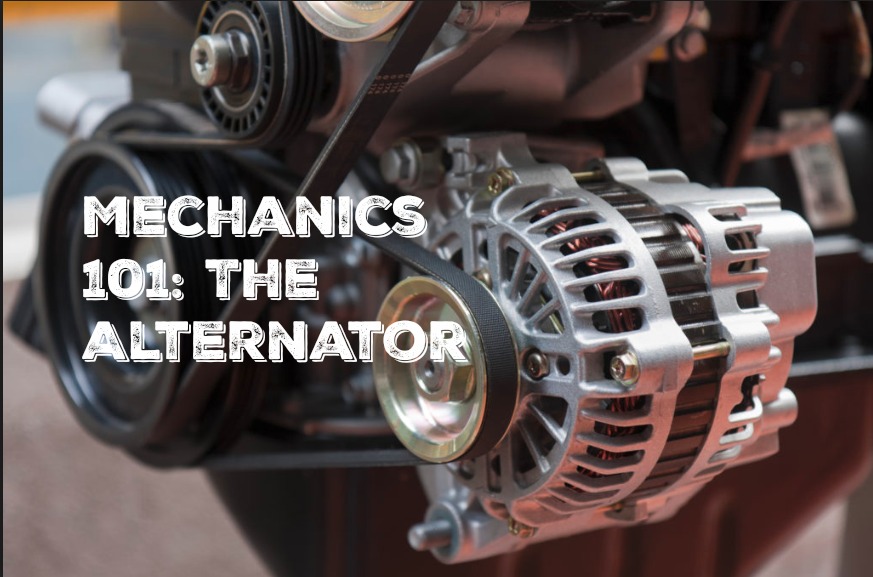 The car alternator is one of the most commonly known car parts but most people don’t know exactly where it is ,or what it does, let alone how it could fail on you. Most alternators are located near the engine – near the front -and mounted on a bracket and is works by using a serpentine belt or sometimes an accessory belt.

The function of an alternator is pretty simple- and important – it provides electrical power to the entire vehicle. It also keeps the battery properly  charged while the vehicle is running. So pretty much it converts the mechanical energy into electrical energy. Which is why when your  car won’t start the first 2 guesses to the problem is either the battery or the alternator.

So before the vehicle can use the alternating current it actually needs to be converted – and that is done by a component called a bridge rectifier. It’s pretty much a series of one way electrical check valves that converts the AC into DC.

So output of energy – the normal output is from about 13 to 14 volts which is regulated by an internal component called a voltage regulator that again, is inside the alternator (now you know why they can get expensive) some vehicles doe have a separate computer that regulates it though.

How an Alternator Fails

There are a number of ways that an alternator can fail – the most common failure is an internal failure and that covers actually quite a wide variety of components. So normally when this happens you’ll start to get warning lights on your dash (again, this is why you don’t ignore those lights! They are there for a reason! And never let them go for too long or you can actually end up causing more damage thus costing you more money).
So just so you know, the vehicles does a self test of your entire system when you first turn the key so the battery light usually will come on then – but if it doesn’t turn off – or comes on while you are driving –  then there is an issue.

Accessories can also stop working – modern cars are  smart and can deactivate systems that aren’t vital to your cars operation. Like the AC until or 4-wheel drive are some of the first things that  will shut off.  Also any type of dim light output, like headlights or dash/interior lights aren’t as bright as they should be. So usually you will get that battery light along with some other warnings when the vehicle starts shutting down some systems.

The most familiar failure is the dead battery – sometimes it is an alternator issue, sometimes its a bad or worn out battery. If your car is slow or won’t start, this can be a sure sign that your alternator is not charging the vehicles battery. But there are plenty of other things that can cause that issue too – like the serpentine belt, or alternator pulley can cause similar issues.

When it comes to  cost, it can vary depending on the issues. It can be a couple hundred to a couple thousand – check with your dealerships service department for a quote.

1 Response to Mechanics 101: The Alternator