Why You MUST See AVENGERS: Age of Ultron This Weekend!

I have to admit I am a big super hero movie fan. Before it was even a fad I loved watching movies where being a hero, and good prevailed. So of course when Avengers first came out – and all the Captain America, Iron Man , Hulk and Thor movies – we made sure to go watch them asap!
So when I became a blogger and I started to get opportunities to get a sneak peek of these and other Disney movies, I was obviously beyond excited. Now when I saw the previews of  the new Avengers: Age of Ultron I thought , like most sequels, it wouldn’t compare to the original. However, after spending 2 hours glued to my seat (Ok, well except for one bathroom break with my son because he got a large ICEE) I was impressed to say that – wait for it …

Was even better than the original.

I’m not sure if it’s because in the first Avengers movie they were all just getting to know each other, or maybe I’ve just grown to love all the Avengers in an individual sense since they had their own movies. But I loved LOVED the interaction between all the Avengers, and I was suprised at how many times we literally laughed out loud.

I also suggest if possible SEE IT IN 3D! I have been to plenty of 3D movies that I felt disappointed in; normally they are blurry, or it doesn’t feel like a 3D film, but the Avengers didn’t disappoint. Though some of the actions scenes were a bit confusing to the eye (but it  could be just me, or where we sat, towards the front) but overall it was more than just a movie – it was an experience!

Avengers: Age of Ultron opens in theaters this Friday (check your local theaters for midnight screenings)!

Also – take your kids dressed at their favorite superhero – we saw ALL kinds at the preview this week! 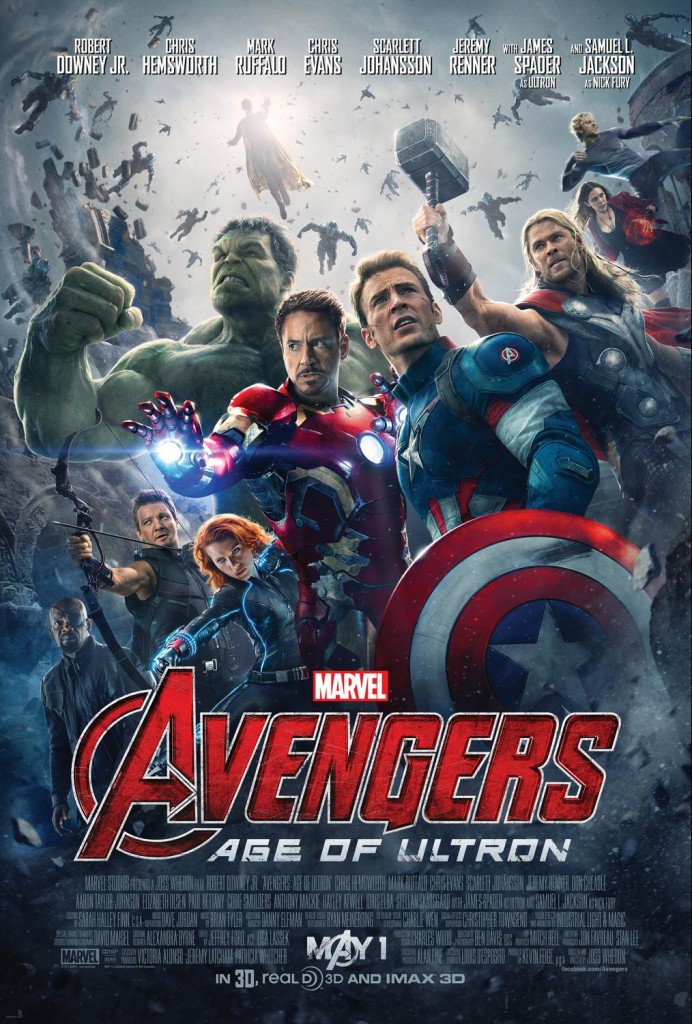 Marvel Studios presents “Avengers: Age of Ultron,” the epic follow-up to the biggest Super Hero movie of all time. When Tony Stark tries to jumpstart a dormant peacekeeping program, things go awry and Earth’s Mightiest Heroes, including Iron Man, Captain America, Thor, The Incredible Hulk, Black Widow and Hawkeye, are put to the ultimate test as the fate of the planet hangs in the balance. As the villainous Ultron emerges, it is up to The Avengers to stop him from enacting his terrible plans, and soon uneasy alliances and unexpected action pave the way for an epic and unique global adventure.

Marvel’s “Avengers: Age of Ultron” stars Robert Downey Jr., who returns as Iron Man, along with Chris Hemsworth as Thor, Mark Ruffalo as Hulk and Chris Evans as Captain America. Together with Scarlett Johansson as Black Widow and Jeremy Renner as Hawkeye, and with the additional support of Don Cheadle as James Rhodes/War Machine, Cobie Smulders as Agent Maria Hill, Stellan Skarsgård as Erik Selvig and Samuel L. Jackson as Nick Fury, the team must reassemble to defeat James Spader as Ultron, a terrifying technological villain hell-bent on human extinction. Along the way, they confront two mysterious and powerful newcomers, Pietro Maximoff, played by Aaron Taylor-Johnson, and Wanda Maximoff, played by Elizabeth Olsen and meet an old friend in a new form when Paul Bettany becomes Vision.