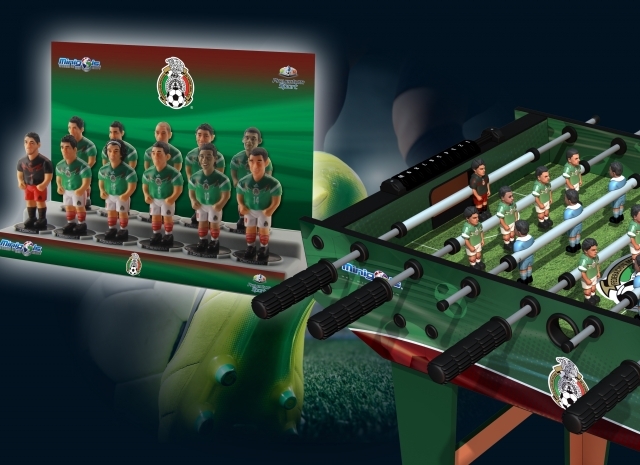 Minigols has licenses with national soccer teams including Mexico, Germany, Spain, and Argentina as well as the three most popular club soccer teams in the world with over 50 million fans each: Barcelona, Real Madrid, and Manchester United. The company is planning to add more teams, including U.S. soccer teams in coming months.  The table retails for $249 with a holiday special of $199 or $249 with the Spain team pack.

The game’s figures are more than foosball players, they are also limited edition Collector Sets for display at home or the office. Each team pack includes 11 players, each painted in detail with team uniforms, player numbers, hair and facial features that represent the real life players. The team packs include a display stand for the entire team. Bases are also available for each individual player complete with the player’s name. The collectible team packs can be purchased separately for $64.99.

The Minigols game and collectible action figures have been a big hit in Europe and are now expanding to the U.S. in time for the 2014 holiday season. With the popularity of the World Cup throughout the U.S. this year, Minigols is sure to be well received this holiday season. It’s a game the whole family can enjoy together.

The fast-action table is the ideal height for children, or the legs can be detached so it can be placed on top of a table for adults.  Unlike full size foosball tables that can take up the better part of a room, the smaller 33.5” x 16.4” size lends itself to easy storage. The game is available online at www.minigolsus.com with free shipping and a free Miguel Herrera action figure (manager of the Mexican national soccer team) with any purchase.