I am a member of the Collective Bias® Social Fabric® Community. This shop has been compensated as part of a social shopper amplification for Collective Bias and its advertiser.

I can’t believe Father’s Day is just around the  corner – it seems just like yesterday I was racking my brain for a gift to purchase my Dad for Christmas! One thing that my family loves is having family movie time – and if your Dad is anything like mine, he isn’t happy unless the movie is packed with action and adventure.

The more shoot outs, car chases and fights the happier he is – so when I found out that Jack Ryan: Shadow Recruit and The Italian Job were coming out in a Blu-Ray 2-Pack at Walmart, I knew this would be the perfect gift! 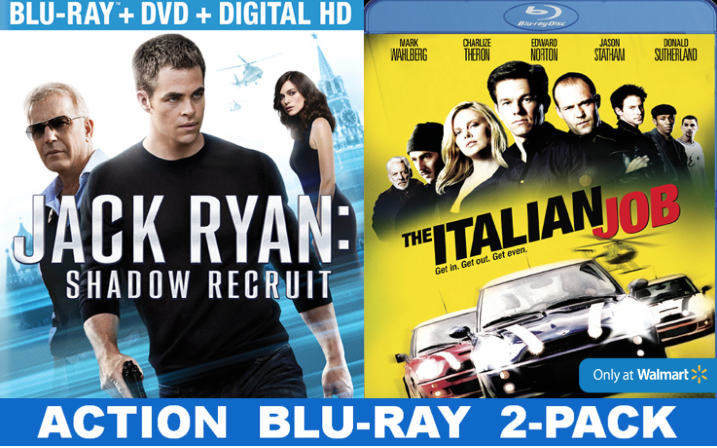 They are offering an exclusive Blu-ray release of Jack Ryan: Shadow Recruit on Tuesday, June 10 for only $12.96 and YOU get $15 off sports tickets at Ticketmaster (Offer Tuesday, 6/10 – Saturday, 6/14 ONLY).

The movie is about Jack Ryan as a young covert CIA analyst who uncovers a Russian plot to crash the U.S. economy with a terrorist attack. It features great actors and actresses such Chris Pine, Kevin Costner, Keira Knightley and is directed by Kenneth Branagh.PLUS, the Walmart Exclusive pack includes both Jack Ryan: Shadow Recruit and The Italian Job. You don’t get a much better gift than that: TWO great movies AND $15 off Sports Tickets, all for one very low price!

This is a Walmart EXCLUSIVE so make sure to visit your local Walmart and pick-it up before they are out of stock!!