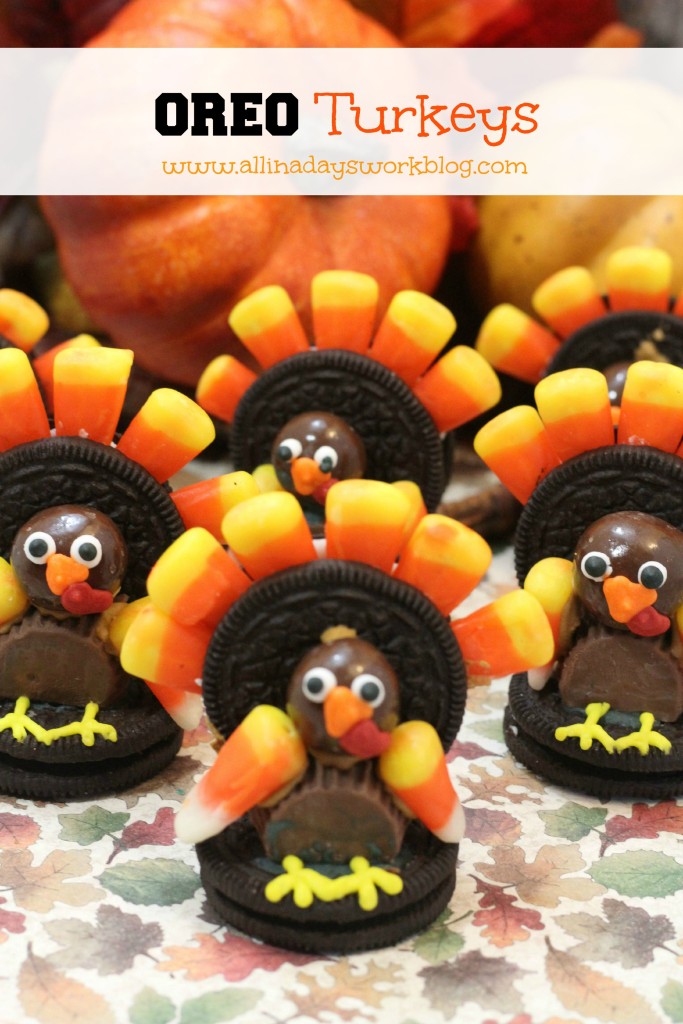 -Refer to the picture of the Oreo turkeys when assembling your own turkeys.
-The directions for the turkey will depend on how many Oreo Turkeys that you will be making.
-For the tail fan, you will separate an Oreo into two pieces in order to make the tail feathers (candy corn) keeping the filling in these cookies.
-Using the white royal icing as”glue” apply thick layer of the white icing on the bottom of the separated  Oreo cookie.
-Begin to lay the candy corn on the white icing with the  white end of  the pieces of the candy corn on the inside of the  cookie arranging each piece of candy corn next to each other. 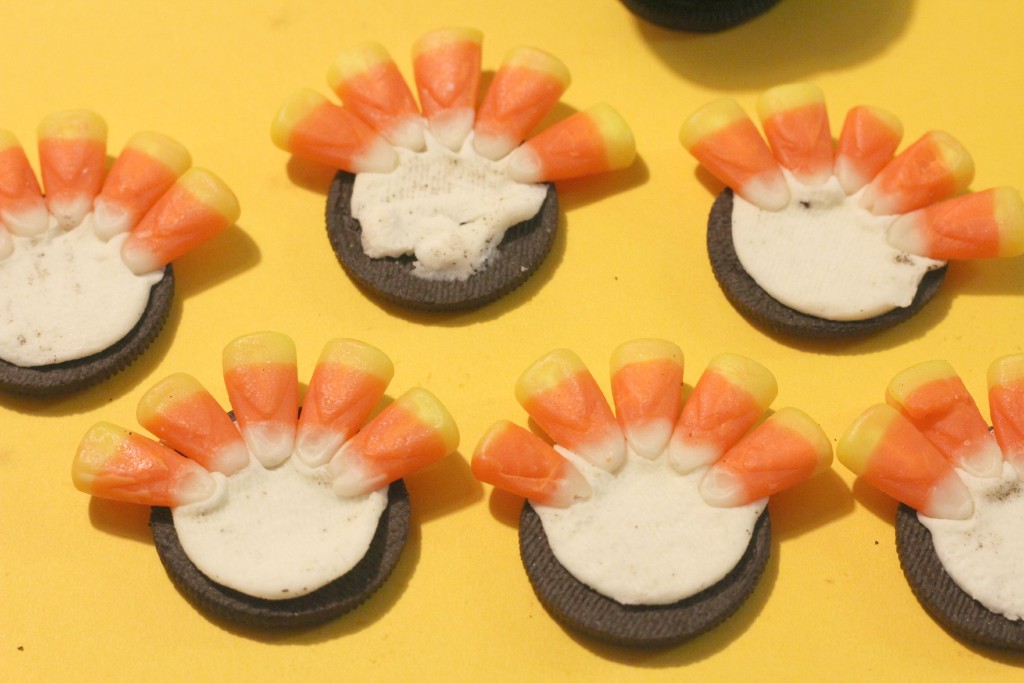 -Arrange the candy corn in a half circle on the separated Oreo cookie.
-Lay the top half of that Oreo cookie on top of the bottom half of the cookie (the one with all of the candy corn on it).  If needed apply more white icing as glue.
-Allow time for these to dry. Set aside.
-Take out the mini Reese peanut butter cups.  Cut about 1/4 of the cup off allowing the candy to sit flat on another Oreo cookie. (These Oreo cookies will be the base of the turkeys).
-Use the tan icing as the “glue” to hold the cut Reese peanut butter mini cup to the Oreo cookie.
-Allow the “glue” to dry.  Set aside. 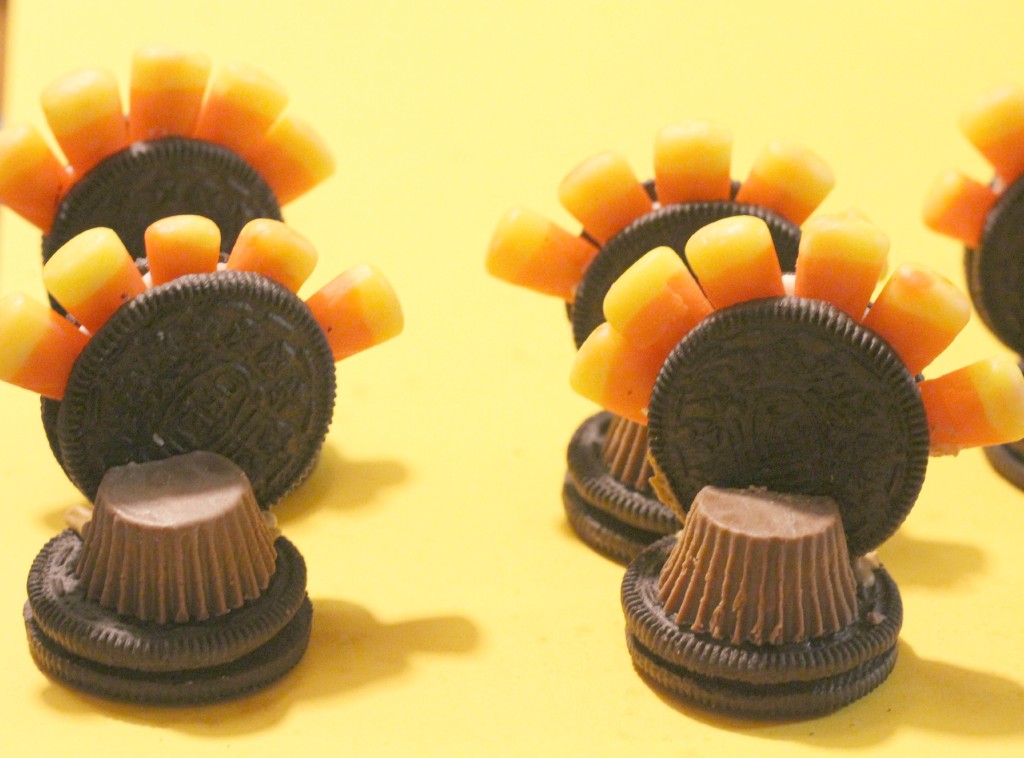 -Check on the tail fan to make sure that it is dry.  If it is then glue(with tan icing) the “whooper” to the tail fan.  The whooper will be the head of the turkey. Set the tail fan down when gluing the head on it.
-Allow for the head  to dry completely.
-Apply the mini candy eyes to the head (the whooper) of the turkey, then using the orange icing add a small nose.  Allow the nose to dry for about 30 seconds.  When the nose is dry add the red waddle with the red icing.  Allow time for this to dry also about 30+ seconds.
-Set aside for until all of the turkey heads are complete. 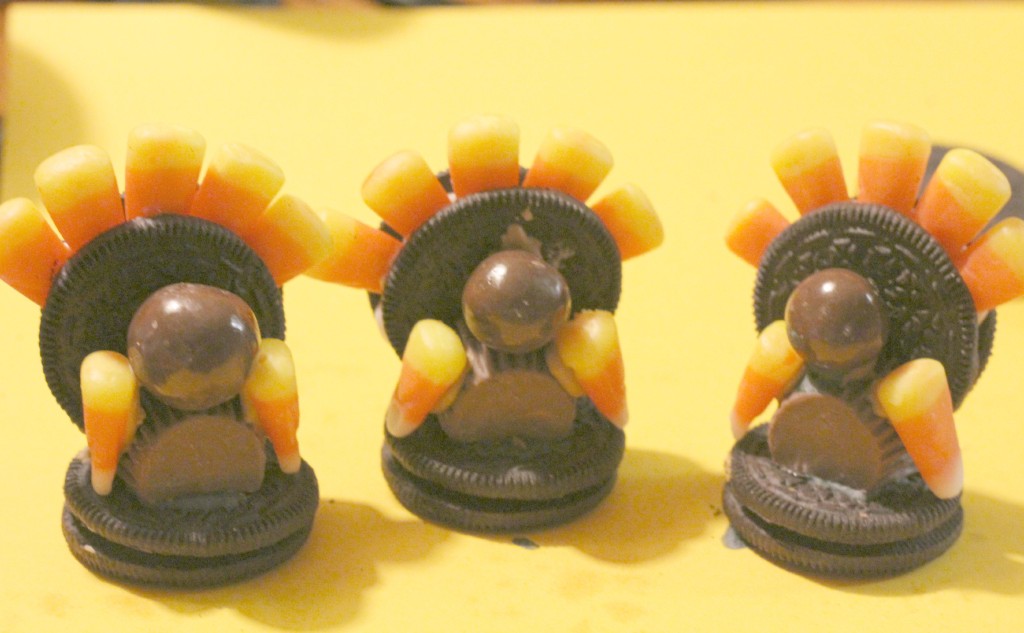 -Using the tan icing (a thick layer of icing) sit the turkey tail fan on the bottom Oreo cookie (the base). Lend the entire turkey creation against a filled bottle, jar, can or something else heavy until this drys.  This may take several hours.  Make sure that you place this someplace where it will not get moved or bumped into.
-After this has dried add the two pieces of candy corn with the white pointing down and outward for the turkey’s front legs.  Allow time for the icing (glue) to dry.
-Using the yellow icing draw the turkey feet on the bottom cookie by making a small line and adding two shorter lines pointing outward.
-Allow at least one hour for the completed turkey and all icing decor to dry. 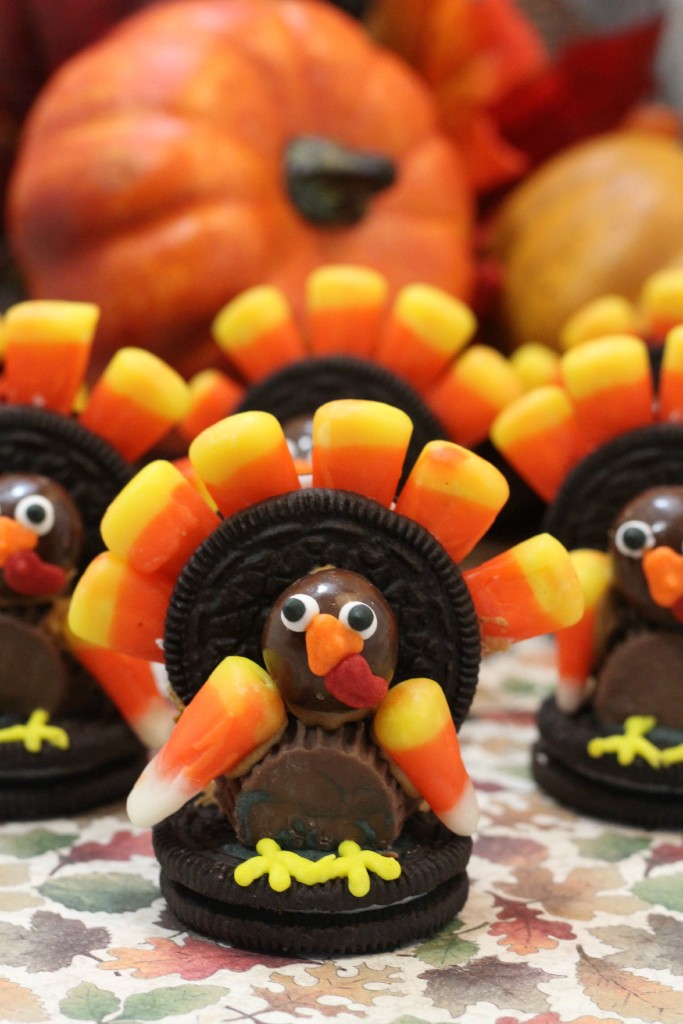 -Always refer to the picture for more instruction.

This entry was posted in Holidays, Recipes. Bookmark the permalink.