I always took offense when my Northern-Maine-born husband told me “you people in Ohio can’t drive.” I mean what, just because you have snow 9 out of 12 months, doesn’t make you better then me ..but I guess when it comes to driving, it does! 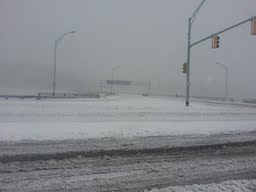 This was my view as I sat at a red light heading to work this morning. I’m pretty sure I didn’t get over 20 mph, not because I was afraid, but because people in 4WD pick up’s, and SUV’s were flying by me at 50 mph (and I really didn’t want to be anywhere near them), and then the other little scaredy cats driving about 5 mph even on the roads that were clear… I mean Really??! It took me an extra 55 minutes to get to work this morning!

There are a few precautionary steps you should take before you wander out into the Winter Wonderland we call streets. I know you saying “Um, I’ve been driving for 20 years, I already know everything there is to know..” Well I say, “No ya’ don’t!” or at least most of you don’t! So before you accuse me of being to harsh, please see below: 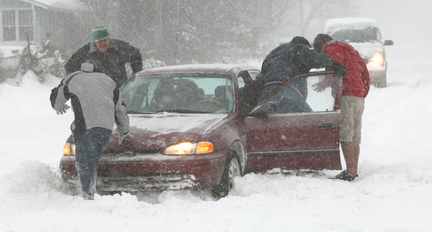 if you need any other advice (though I’m not sure why you would) you can also get some more snow driving tips and how to prepare your car for winter here.

1 Response to Ohio + snow = stay off the roads!