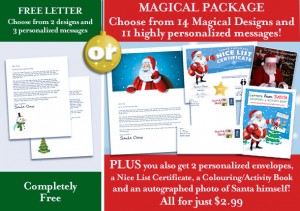 Letters from Santa  provides parents a simple way to create beautiful, personalized letters from Santa that can be printed instantly in the comfort of your home. It’s quicker than Magic Elf dust!!
Available in both a free and low-cost Magical ($2.99) version, the letters are full of special details only Santa could know, and address a multitude of worries that little ones might have.

Santa eases the concerns of children that Santa won’t find them because they will be on vacation at Christmas time, because they have moved that year, or even because they don’t have a chimney. Santa soothes the little hearts of children whose families are living apart, or who have military family members that can’t make it home for Christmas. Santa even addresses specific gift requests, celebrates the little one’s big accomplishments, and commemorates Baby’s First Christmas. 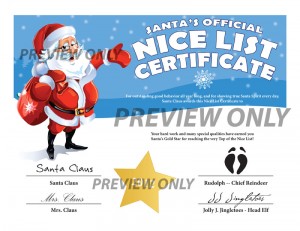 As an added bonus, when you purchase a Magical Letter from Santa, it comes as part of a package which includes a lovely personalized printable Official Nice List Certificate, a beautiful printable autographed photo from old St. Nick himself, and last but not least, a 27-page printable Coloring & Activity Book!

Imagine…their eyes will light up brighter than Rudolph’s nose!Enter to WIN your own Letter from Santa for your little one this Christmas! Use the Rafflecopter below! There will be FIVE winners! Good luck!
**UPDATE: I forgot to give my son his Letter from Santa last nite – this morning as I was trying to  drag his lazy little hiney out of bed, I remembered the letter and told him it was in the car. That boy was up faster then lightening! He got dressed, brushed his teeth and was out in the door in no time! LOL. He was soo excited to rip open the letter, and have his sissy read him what Santa had to say. He took it to daycare for Nana to read, and has been carrying it with him ever since. This is a perfect way to get your kiddos excited about Christmas!

2 Responses to Letters from Santa