Top 10 Must See Destinations in Japan

Most people that tend to travel to Japan focus on Tokyo and Kyoto, which are both amazing places to visit. But there are are a lot of hidden treasures in Japan that many people don’t think about – and here’s a list to make sure you are getting the full experience in your travels throughout Japan. 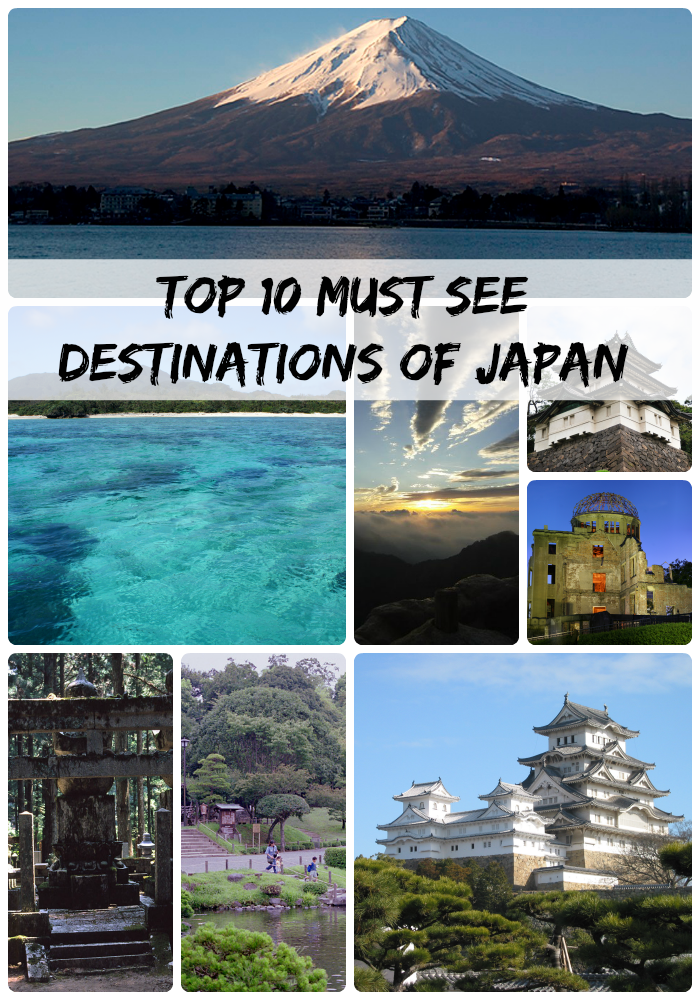 OKINAWA – Okinawa is the fifth largest island in Japan with clear seas bursting with fish, fantastic food, gentle people, beautiful beaches and jungles there is no wonder that the island draws tourist all throughout the year with their subtropical climate. One of the most popular ares of Okinawa is the city of Nago located on the Northern part of the island. Nago Beach is one of the favorites which offer showers, washrooms, vending machines, picnic tables and barbecues.
Yaeyama Islands is a also a beautiful beach area, with a laid back atmosphere, and if you didn’t know better you would like you were relaxing on the beaches in the Caribbean not on the islands of Japan.
Also on the outer island you’ll find strong evidence of the Ryūkyū culture, the cultural combination of Taiwan, China and the rest of Japan. The cultural aspects of the Ryūkyū can be found in the islands cuisines and vibrant use of color and bold tropical patterns.

HEMEJI CASTLE is a hilltop Japanese castle complex in Himeji. The castle is regarded as the finest surviving example of a Japanese castle architecture composed of a network of eighty-three building with an advanced defensive system. Unlike many other Japanese castles, Himeji was never destroyed in wars, earthquakes or fires and survived in it’s original splendor. It is both a national treasure, and a world heritage site.

HIROSHIMA PEACE MEMORIAL – any history buff will enjoy the Hiroshima Peace Memorial and Park. One part of the museum gives details through pictures and film  information on what lead up to and caused the atomic bomb. The other shows the the full devastation of the atomic bomb in vivid detail. The park where the museum is located is also known for the famous cherry blossom viewing.

A NIGHT ON MT. KOYA – Mt. Koya has been a place of pilgrimage since the Shingon school of Buddhism was established among it’s ancient cedars. One of the highlights that tourist enjoy is the opportunity to stay with the monks at one of Koya’s mountaintop temples. Eko-In is one of about 50 places open to guest and offers a tranqil room, a multi-course vegetarian dinner and a chance to join the monks and pilgrims for an early morning prayer. Most definitely a once in a lifetime experience.

TOKYO IMPERIAL PALACES – the main  residence of the Emperor of Japan. The large beautiful area is located in the Chiyoda are of Tokyo near Tokyo station and includes several buildings. The main palace is the private residence of the imperial family, an archive, and museum.

SHIKOKU PILGRIMAGE –  The Skikoku Pilgrimage is a Buddhist pilgrimage to visit 88 temples associated with the great priest Kukai=”nofollow”. People visit the temples many ways, some walk the entire way, staying with locals along the way, others bike, or rent cars. It’s been said to be good luck if you visit the temples in a specific order, though it’s not necessary. I’ve been told that walking or biking will give you the best scenic tour – one that can’t be bought!

MT FUJI –  Mount Fuji is the most majestic and highest mountain in Japan. Most known for sight seeing and climbing, Mt. Fuji offers multiple climbing routes, as well as paragliding (which I think would be totally epic). Climbing is offered through the summer months, and they even have local resorts and hot springs to enjoy during your stay. I can’t imagine any photo can really give you a clear picture of what seeing Mt. Fuji in person would be like. Something to definitely  add to your to do list while traveling.

KANAGAWA – Not known to many travelers, Kanagawa is Tokyo’s neighboring, more laid back city. Just an hour away by train from Tokyo, Kamakura is a fun destination for those who want to just take it easy for a bit. You can stroll along the roads and admire the temples ,or walk the calm beaches. Hakone, located in Kanagawa, is known for hot springs, ryokan, and magnificent views of Mt. Fuji!

KYŪSHŪ –  A far difference from it’s bustling neighboring cities,  KYŪSHŪ is a beautiful lustrous destination to go hiking, take a swim in the forest, surf some awesome waves, take in the glorious cedar trees, or even be showered with ash from a live volcano.

SHUKI TAISAI FESTIVAL – If you happen to visit Japan in October, you absolutely cannot miss the Shuki Taisai Samurai festival! Shuki Taisai is held annually on the 16th and 17th of October at the Nikko Toshogun Shrine. One of the main attractions of this festival is the procession of 1,000 men all in full samurai costumes. It is definitely a sight to  be seen!

What places to visit are on your bucket list?

1 Response to Top 10 Must See Destinations in Japan