Shari West was struggling with weight problems. She weighed much more than she wanted to. Needless to say, her weight issues were weighing on her mind and affecting her life. That is when she discovered Nutrisystem and her life changed for the better. She took a picture of herself the day before starting the Nutrisystem weight loss program, set a weight loss goal and got started. Her picture became a source of motivation for her. She knew in her mind she didn’t want to look like that anymore. That was reason enough for her to persist with the program and she succeeded.
A Successful Beginning
Luckily for Shari, Nutrisystem worked for her from the beginning. Some people start Nutrisystem but quit because they can’t stick to it (i.e they don’t like the food), and they don’t see any results. But Shari followed the program and saw results within two weeks in the program. It was then that she noticed a couple of inches had come off. “When I set my mind on something, I follow through” says Shari who found the Nutrisystem plan very simple. She was interviewed by Rachel at SecondTimeAround09. The simplicity of Nutrisystem is what makes it so popular according to the reviews posted on WeightLossTriumph.com. 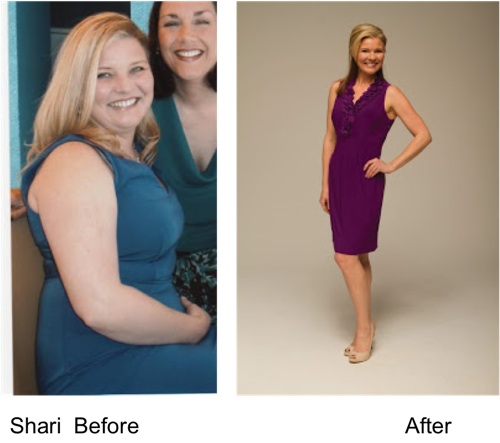 The early success proved to Shari that the effort she was putting in was paying off. This gave her the boost she needed to carry on with the program and reach the weight loss goal she had set for herself.

Enjoying the Food
A major reason why Shari enjoyed a smooth journey following the Nutrisystem program was that she fell in love with the food on offer. For those of you who don’t know, Nutrisystem provides precooked and prepackaged meals that you have to order through their website. Select the meal plan you want to follow and order the food accordingly. They deliver 28 days’ worth of supplies to your doorstep. From there on in, it is simply a matter of sticking to the plan and reaching your goal. As mentioned above, Shari enjoyed the food, particularly the lasagna, cookies, hearty beef stew and cinnamon buns. For some strange reason, she didn’t enjoy the hamburger!
Persisting With It
Shari reminded herself of her weight loss goal every day by looking at the picture she had taken before starting the program. She was already seeing the difference when she measured her waist every week. This is what motivated her to keep going. In her experience, she recounts that she wanted to become a Nutrisystem success case and that is what she did. Fortunately for her, she found the program easy to follow and faced no major setbacks along the way.
Reaching the Goal
It took Shari all of 10 months to reach her weight loss goal. In that time, she had lost 57 pounds and it showed. Unlike many other people, Shari didn’t stop following Nutrisystem right after completing the program. She managed to retain her new weight level for almost one year, at the time when she shared her results. Her strategy was simple: follow the program, stick to the guidelines and persist. Where most others fail, she didn’t.

This entry was posted in Fitness Friday, Fitness/Health. Bookmark the permalink.