Fitness Friday: Do you know what your drinking?

It seems like every where you turn there is a new study, report, or claim that drinking pop is detrimental to your health. The studies state that diet pop, especially, can cause obesity, strokes,tooth decay, kidney damage and certain cancers, as well as elevated blood pressure.

Hannah Gardener, PhD from the University of Miami presented some study results earlier this year at a health conference that showed a 48% increase in heart attacks and stroke risk among daily diet pop drinkers, compared to people who did not drink diet pops at all or did not drink them every day.

Purdue University behavioral sciences professor Susan Swithers. PhD, had a similar results in 2004, following the publication of her study in rats suggesting that no-calorie sweeteners like those in diet pop increase appetite!

WOW! It’s hard to imagine something being called “diet” that can be so bad for you. Many others besides the above references studies, show similar results.

As I was researching more about diet soda, I found an easy catch all blog post on the “Top 5 Reasons Not to Drink Diet Soda” that breaks it down for you.

HFCS replaced sugar in the 1970s as a much less expensive alternative to cane sugar.  Despite what the CRA suggests in their ads, it’s is hard to eat it moderation because it’s in so many packaged foods and beverages, soft drinks being the worst offenders!

According to Dana Flavin, author of the article Metabolic Danger of High-Fructose Corn Syrup, “between 1970 and 1990, the annual intake of HFCS has increased by more than 1,000%, greatly exceeding the change in intake of any other food or food group.  HFCS is now the primary caloric sweetener added to soft drinks in the United States, and comprises more than 40% of caloric sweeteners added to foods and beverages.”

While HFCS is derived from a natural source (corn), HFCS is essentially an unnatural, man-made product.  The corn goes through a series of processes to continually break it down into starch, glucose and fructose using enzymes produced by bacteria and fungus.  The end product contains about 80% fructose and 20% glucose, twice as much fructose as table sugar.  Not to mention that most HFCS is made from genetically modified corn.

Despite the CRAs claims that “your body can’t tell the difference,” science shows otherwise.  There is great concern about the high intake of HFCS because

fructose is metabolized differently from glucose.  While they are both simple sugars, glucose can be metabolized and burned for energy, as well as stored in the liver for later use.  Where fructose is more rabidly metabolized in the liver (essentially it is converted to fat by the liver), which leads to an excess concentration of fats and lipoproteins in your body.  A rise in triglyceride levels promotes atherosclerosis and elevates cardiovascular risk, while increased fat storage in the liver may lead to increased incidence of non-alcoholic fatty liver disease.

In February 2011 the Center for Science in the Public Interest filed a petition to the FDA to ban the use of caramel colorings in soda.  Why?  Because based on their research they found that the caramel coloring used in Coca-Cola, Pepsi, and other foods is contaminated with two cancer-causing chemicals.

The National Toxicology Program (the division of the National Institute of Environmental Health Sciences that conducted the animal studies) said that the evidence is clear that these two chemicals are in fact animal carcinogens, and chemicals that cause cancer in animals pose a risk of cancer to humans.

The caramel used in sodas is not the same as what you might make in your kitchen from scratch.  The caramel used in colas and some other products is a man-made chemical concoction—it is not found in nature.  It’s made by reacting sugars with ammonia and sulfites under high pressure and temperatures.  These chemical reactions result in the formation of 2-methylimidazole and 4-methylimidazole, which the studies conduced by the NIEHS showed caused lung, liver, or thyroid cancer or leukemia in laboratory mice or rats.

Phosphoric acid is a flavor additive used to give sodas their tangy, sharp flavor.  It’s an acidify agent, and it helps slow the growth of mold and bacteria which would otherwise multiply rapidly in the sugary solution.  It makes soda more acidic than lemon juice or vinegar, and this is why soda can essentially be used to remove rust or the scum build up around your toilet!  I actually saw this demonstrated on the Nake Berkus Show:)

Phosphoric acid consumption is linked to lower bone density.  The reason being when your body becomes acidic it will work to neutralize the acidity by pulling calcium from your bones.  Not surprisingly, opposing studies funded by Pepsi show otherwise. 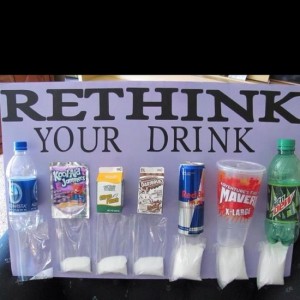 Don’t be fooled by term “natural!”  Food manufactures play tricks with our perceptions of what words mean.  As a health-conscious consumer, if you see a label that says  “natural” you are more likely to buy it because you think it’s good for you.  But just because a food label has the word “natural” on it doesn’t mean it’s healthy!  Mercury, cocaine, marijuana and alcohol are all “natural,” but that doesn’t mean you should put them in your body!

Food companies can use the umbrella term “natural flavors” in place of a list of ingredients that the FDA claims are Generally Regarded as Safe  (GRAS).   In other words, if an ingredient is on the GRAS list, companies are not required to list the additive on their label.

But here’s the thing.  Ingredients like aspartame, acetaldehyde, acetic acid and agar, which are associated with a host of health problems, do not have to be listed because they are GRAS.  And there are hundreds of other GRAS additives that don’t have to be listed that you are probably eating every day!

An additive is only removed from the GRAS list when there are enough mounting reports citing its harmful health effects.  But how are we to know what specific additives are making us sick when they don’t have to be listed on the label?  How do we know which additives are being put in soda?  When you look at the ingredients in soda you might say “there’s only 6 ingredients in here—not too bad!”  But how many ingredients fall under the term  “natural flavors?”

What’s even more disturbing is that, in the interest of saving time and money, the FDA allows food and additive manufacturers to provide their own “evidence” to show the safety of their additives.  So these companies basically get to determine their own GRAS status.

It seems everyone loves their caffeine!  When I work with clients, I find that caffeine is one of the most difficult substances to kick.  Whether it be soda or coffee, so many people rely on caffeine for a pick-me-up, and they don’t fully realize the damage they’re causing in the long run by continuing to put this addictive substance in their bodies.

Here’s what caffeine does to you and why you should either avoid it or consume it in very limited quantities.

Caffeine, like other stimulants, causes you to release serotonin (“feel good hormone”), which initially leads to an improved mood and feeling more alert, but is quickly followed by a rapid drop in serotonin which leads to crashing and feeling down.  This serotonin depletion sets up a very viscous cycle because the effects of low serotonin are then followed by cravings for caffeine and other stimulants to get that serotonin rush again.  This pattern is essentially an addiction—you need more and more to keep getting the desired effect.

Use of caffeine can make you dependent on other stimulants to repeat that rush of serotonin.  This is why you may find that your cravings for caffeine are coupled with sweet cravings.  This is also explains why when you try to quit one addiction i.e. caffeine, your body demands that you replace it with another i.e. sweets—your needs something stimulating to get that fix!

The continued use of caffeine disrupts your blood sugar levels and hormones, exhausts your adrenal glands and depletes your serotonin supply setting the stage for fatigue, sleep disturbances, weight gain, anxiety, depression and other related health problems.  Not to mention that your body becomes malnourished when you’re relying on caffeine and/or sweets to fuel it, as they offer no nutritional value.

According to Dr, Schwarzbein, author of The Schwarzbein Principle, there will come a time (if it hasn’t happened already) where caffeine no longer gives you the boost that you need, no matter how much you drink, because your serotonin supply in your brain has been used up.  And when you end up serotonin depleted, you become extremely depressed and possibly suicidal.

So overall the lesson is?? DRINK WATER! 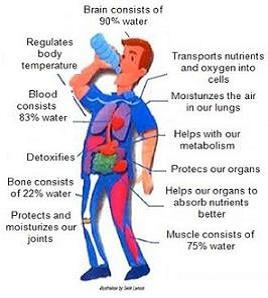 I know some people have a hard time consuming large amounts of water, but there are other alternatives:

Pop is a hard habit to break, whether it’s diet or not. So I want to challenge you, along with myself, to go 30 days without pop! No diet, no regular, none!

I found a great website that helps me stick with my goals with a daily reminder, and monthly track sheet. Sign up for Goalforit to help keep yourself on track.

Come back and share with me how your doing (daily if you’d like) and one lucky reader will win $25 gift card!

2 Responses to Fitness Friday: Do you know what your drinking?