#BigHero6 Will Knock Your Socks Off – Go See it NOW!

Earlier this week my family had the opportunity to preview Big Hero 6 before it came out in theaters. My 6 year old son, of course, was the most excited and couldn’t wait! (He kept asking and asking if it was the ‘day’ yet!)

I have to admit – I don’t think I’ve ever been completely disappointed with a Disney movie.
There maybe have been times when I wasn’t overly impressed; but I don’t think there has ever been a Disney movie that I wouldn’t watch twice. Big Hero 6 is definitely no exception! We could watch it over and over again! 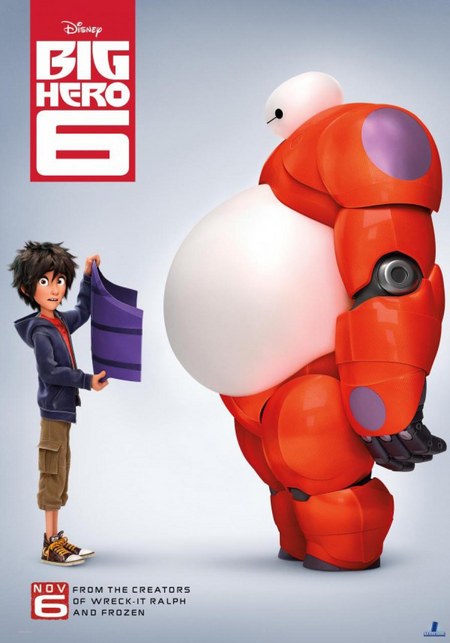 Big Hero 6, is an action-packed comedy-adventure about the special bond that develops between Baymax, a plus-sized inflatable robot, and prodigy Hiro Hamada. When a devastating event befalls the city of San Fransokyo and catapults Hiro into the midst of danger, he turns to Baymax and his close friends adrenaline junkie Go Go Tomago,  Neatnik Wasabi, chemistry whiz Honey Lemon and fanboy Fred. Determined to uncover the mystery, Hiro transforms his friends into a band of high-tech heroes called “Big Hero 6″

I will try not to give too much away – but Big Hero 6 is definitely going to be the hit of the holiday season. Baymax helps Hiro learn valuable life lessons (what Disney movie doesn’t?) Hiro’s big brother, Tadashi, is killed in a fire while trying to rescue his professor from a fire at the university he attended.
Hiro accidentally discovers that the fire his brother died in was not an accident, and he it  determined to seek revenge. His friends – who makes up Big Hero 6 – help Hiro in finding out the truth about his brothers death, and who was responsible.

The movie will have you laughing, crying, and smiling in the mere 105 minutes that you are in the theater.  This is a movie appropriate for all ages – young and old. Definitely a family movie night that I would recommend!

Here’s some FUN FACTS about Big Hero 6 – in theaters now!!!

SLAM DUNK – Baymax is 6 feet tall and 75 pounds—until Hiro mechs him out. Baymax, in his super suit, is more than 7 feet tall and can lift 1000 pounds. “He’s all air,” says head of animation Zach Parrish.

IT’S ALL ABOUT THE BLINK – Baymax sports a standard nine-frame-blink, says head of animation Zach Parrish. “We play with the speed of his blink throughout the film, but for the most part, it’s a standard blink. It’s the amount of time we give the audience to think before he blinks that says a lot—the longer it is, the more time he’s processing. A double blink shows confusion. We used that a few times in the film. That could be an acting choice for a human character, too.”

NEED FOR SPEED – Artists looked at speed skaters to inform the body type and movement for GoGo Tomago, a passionate student of speed.

CHILL OUT – Wasabi, at one time, was a very Zen character with very Zen dreadlocks. When filmmakers tweaked his personality, they initially decided the neatnik wouldn’t be a fan of the not-oft-shampooed-do and gave him a haircut. The look didn’t last. It turns out, everyone was just too attached to his cool locks.

LOOSE TOOTH – To ensure Hiro’s charming gap-toothed grin stayed intact from any angle, controls were added to his teeth so animators could make adjustments as needed.

ROBOT LOVE – Ryan Potter, who voices Hiro in “Big Hero 6,” was obsessed with building robots as a kid. “I was 9 or 10 when I got a robotics kit,” he says. “I absolutely love science.”

MORE ROBOT LOVE – Genesis Rodriguez, who lends her voice to Honey Lemon in “Big Hero 6,” was on her school’s robotics team. “I was a welder,” she says. “So I made sure my weldings were just perfect and very aesthetically pleasing as well. People didn’t expect us to be so good. That was the beauty of it. We were just this bright group of girls who had an idea, executed it and beat the guys.”

FULL CIRCLE – As a child, Damon Wayans Jr., who provides the voice of Wasabi, wanted to be an animator when he grew up. He even studied animation after graduating high school before he decided to pursue acting.

MARTIAL ARTISTS – Filmmakers selected karate to broaden Baymax’s skillset—but animators had to adjust some of the movements to work for the voluminous character’s build. A few members of the team visited a nearby martial arts studio to get a feel for the practice. Pros were asked to attempt some of the moves while on their knees to simulate Baymax’s signature proportions.

I CAN FLY – Filmmakers consulted with flight specialist Jason McKinley, who worked on both “Disney’s Planes” and “Planes: Fire & Rescue,” to choreograph and execute the flight sequences with Baymax and Hiro.

This entry was posted in Entertainment, Uncategorized. Bookmark the permalink.